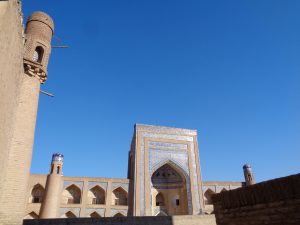 Article written with the collaboration of Irina Brunereau, journalist in Tashkent. (Source of translated political speeches: Ministry of the Foreign affairs of the Republic of Uzbekistan)

Uzbekistan has hosted the 43rd session of the Organization of Islamic Cooperation (OIC) Council of Foreign Ministers, on 18-19 October 2016 in Tashkent, under the motto “Education and Enlightenment – Path to the Peace and Creativity”. Uzbekistan will officially take over the functions of Chairman of the Ministerial Council until the next 44th session of the body.

Uzbekistan became a full member of the Organization on October 2, 1996.  Since then, Uzbekistan  pushed continuously for the consolidation of the OIC’s role (See Annex). During the 43rd Session, Uzbekistan again stressed the importance for a greater OIC’s role.

Uzbekistan comprehends that the dynamic processes of globalization and deep transformation of the system of international relations are leading to emergence of new security challenges and threats. To achieve future stability and reduce geopolitical rivalries at Eurasian and global scale in a multipolar world,  it is necessary to manage and contain the centrifugal forces in the world. Part of the solution is a new institutional architecture fully adapted to this new emerging multipolar world.

The Minister of Foreign Affairs of the Republic of Uzbekistan H.E. Mr. Abdulaziz Kamilov declared during OIC Preparatory meetings that  "It is important to widen the dialogue on various levels among countries and nations, establish the systemic ties not only among governments, but also the parliaments, representatives of education and science, culture and public. These very objectives can consolidate the multilateral cooperation in the framework of the Organization of Islamic Cooperation."

Uzbekistan is a member of OIC, but also the Shanghai Cooperation organization(SCO),  a partner of the NATO Partnership for Peace and a major actor of the EU Central Asia strategy. Uzbekistan has therefore strong interest in promoting cooperation and complementarity between these organizations, and reducing geopolitical rivalry.

These netting of institutions like OIC, OCS, NATO, EU  looking alike "Olympic circles" is in symbiosis with the emerging multipolar world and the need to maintain a balance between different poles of power, alliances and political and security Institutions representing their interests. This emerging political and security institutional architecture is improving  synergies between these interleaved organizations and  should lead to more stability. 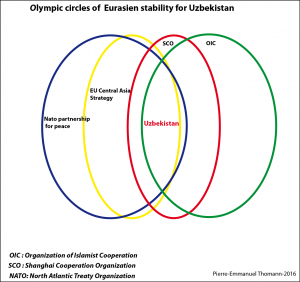 Contribution to a reduction of tensions around the question of Islam

Uzbekistan also promoted OIC in a way to become more significant in strengthening the tolerance, mutual respect of cultures, peace and accord both inside the Islamic world and among the representatives of various religions and peoples.

These principles in the OIC’s activity according to Uzbekistan are necessary the search for peaceful, political-diplomatic and preventive methods of tackling conflicts, as well as addressing them on timely basis.

Uzbekistan values Laicity and the model of a peaceful Islam.

One of  the main reason for that is that Uzbekistan has a very deep and strong civilisationnal past and Islam and culture where intertwined in the very ancient history of the country. Uzbekistan has a unique heritage of Islamic culture and her thinkers of Islamic world contributed to the development of world civilization. The names of such great figures as Imam al-Bukhariy, Imam al-Termeziy, Beruniy, Al-Khorazmiy and Imam al-Maturudiy are well-known in the history of not only Muslim countries, but also the entire world. This cultural and religious inheritance gives Uzbekistan the legitimacy to promote its own model of Islam.

Uzbekistan was also member of the Soviet Union, and inherited some common features with Europeans such as the Secular state. Uzbekistan built in this respect its own model after independence, and the priority is to transmit it to younger generations.

During his Address at the opening ceremony of the 43rd session of the OIC Council of Foreign Ministers as Acting President of Uzbekistan H.E. Mr. Shavkat Mirziyoyev underlined that :  "We strongly condemn the persons who are exploiting the religion of Islam for the purposes of violence and bloodshed, and we will never come to terms with them."

The objective is therefore to make prevail the vision of Islam which developed itself in Uzbekistan during her long historical past, especially in a context of competing models and the risk of cultural dissolution.

He declared that "It is one of the priority directions of our state to preserve the historical heritage, study and transfer it from generations to generations. These priorities become more important in the condition of globalization, when the new threats, and particularly, the «popular culture» and mood of sponging are emerging. Therefore, at present it is ever important to safeguard and enrich the sources that define the spiritual world of a man and culture of peoples."

This approach is not only valued for the Uzbek nation but also a necessary  step to foster international stability and cooperation.

Mr. Shavkat Mirziyoyev also underlined that "The life itself proves that in the competition among states and civilizations the place of national and universal values is unique. From this point of view, it is especially important to deeply study, comprehensively understand and widely popularize the works of Islamic scholars, who are our great ancestors, their invaluable contribution to the development of the world civilization. This is important to strengthen among the youth the feeling of strife to obtain education and learn science, ensure proper comprehension and acceptance of the Islamic values and culture by all societies, and promote the real essence of Islam among all nations of the world. At present, it is also especially important to establish a dialogue among religions, nations and cultures on international level to achieve peace and tranquillity."

In a multipolar world where tensions rise in many parts of the globe, success stories are important and should be strongly supported by European countries.

The role of Uzbekistan is therefore important to contribute to a more balanced and successful emerging international institutional  architecture.

European countries have also an interest in having Uzbekistan, a pivot country in Central Asia, being successful in building a model of modernization in synergy with the model of peaceful Islam.

Uzbekistan plays also a constructive role in the necessary containment of instability coming from the Afghan question characterized by its religious extremism plague.

Therefore, the contribution of Uzbekistan during her OIC chair to promote a peaceful model of Islam on the  Eurasian continent and in the world  should be valued in our troubled times.

COOPERATION BETWEEN UZBEKISTAN AND THE OIC (sources :  Ministry of the Foreign affairs of the Republic of Uzbekistan)

Since 2003 Uzbekistan has been a member of the specialized agency of the OIC – the Islamic Development Bank. The Republic of Uzbekistan signed the New Charter of the OIC on December 14, 2015.

The OIC supported the initiatives of the President of Uzbekistan Islam Karimov on the peaceful settlement of the Afghan crisis and the meeting of the “6 + 2" Contact Group on Afghanistan which was held in 1999 in Tashkent as well as on creation of the Central Asia Nuclear-Weapon-Free-Zone (1993).

The official delegation of Uzbekistan headed by the Prime Minister took part in the 3rd Extraordinary Summit of the OIC in Mecca (December 2005). The convening of this forum was dictated by the need to develop a new strategy for the Organization, aimed at consolidating the Islamic States in the light of the evolving global geopolitical situation, as well as transformation of the OIC into an effective institution capable to withstand modern challenges and threats.

During the event, the Uzbek side made a proposal to develop a common position of the OIC Member-States in international organizations, which was supported by the majority of states of the Muslim world and was later included as a separate expanded paragraph in the relevant section of the text of the 10-year Programme of the OIC.

Along with this document during the forum were adopted the Mecca Declaration and the Final Communiqué, which reflected the desire of Islamic countries to strengthen unity, develop common position with regard to new challenges and threats as well as the need to promote ideas of tolerant and enlightened Islam.

The delegation of Uzbekistan headed by the Minister of Foreign Affairs participated in the 33rd Session of the Council of Foreign Ministers of the OIC in Baku (June 2006). During the event, the OIC Member-States expressed their full support for the position of Uzbekistan on addressing the major problems of the day, the main provisions of which were announced by President Islam Karimov at the summit of Conference on Interaction and Confidence Building Measures in Asia in Almaty (June 17, 2006).

The OIC Missions participated in the parliamentary (2009, 2014) and presidential (2007, 2015) elections in Uzbekistan as international observers. The Secretary-Generals of the OIC Mr. Ekmeliddin Ihsanoglu and Mr. Iyad Ameen Madani visited Uzbekistan in 2007 and 2015, respectively.

The International Scientific-Practical Conference "On the Most Important Resources for Food Security in Uzbekistan" (Tashkent, June 5-6, 2014.) was attended by the OIC delegation led by Deputy Secretary General for Economic Affairs Ambassador Hameed Opeloyeru. In the International Conference " Development of Cooperation in the Region of the Aral Sea to Mitigate Consequences of the Ecological Catastrophe" (Urgench, October 2014) the OIC was represented at the level of Advisor to the General Secretary for Science and Technology Mr. R.Nordin and Director of the Regional Representation of ISESCO Mr. A.Sadri.

The 43rd session of the OIC Council of Foreign Ministers will be held on October 18-19, in Tashkent under the motto “Education and Enlightenment – Path to the Peace and Creativity”. Since then Uzbekistan will officially take over the functions of Chairman of the Ministerial Council until the next 44th session of the body. The time and venue of next session will be determined in Tashkent.

Along with the Session of the Council of Foreign Ministers, the Uzbek side will chair the meetings of the Senior Officials, the Islamic Commission for Economic, Cultural and Social Affairs, the OIC Executive Committee as well as the Coordination Meeting of the OIC Foreign Ministers of the member states, which traditionally takes place in September within the framework of the UN General Assembly.

In view of preparations for the 43rd session of the Ministerial Council, the delegation of Uzbekistan headed by Foreign Minister Mr. Abdulaziz Kamilov participated in the meetings of the Senior Officials and the Islamic Commission for Economic, Cultural and Social Affairs (Jeddah, July 23-28, 2016). During these events, held under the chairmanship of Uzbekistan, the drafts of more than 100 resolutions on major activities of the OIC were discussed and approved for further submission for adoption to the Council of Foreign Ministers Session in Tashkent.