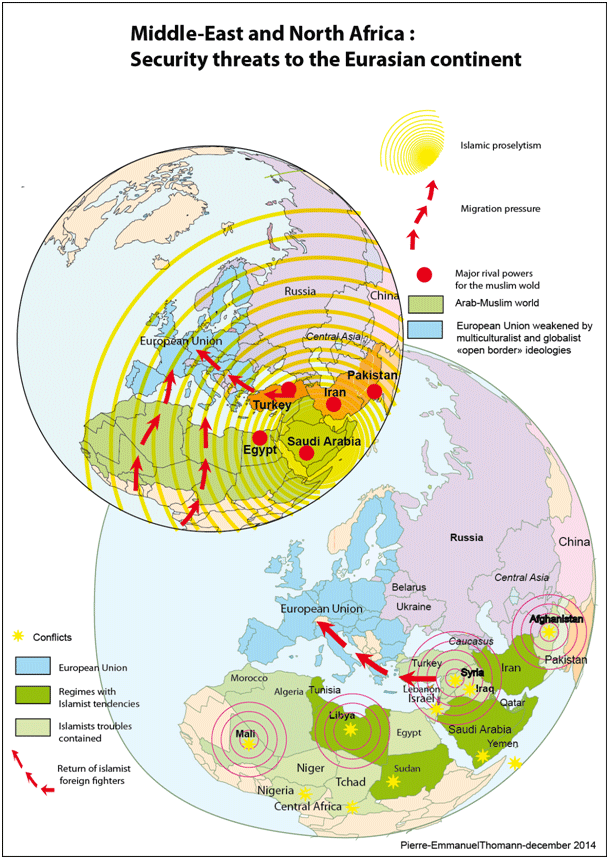 The formation of a coalition of the willing under the leadership of the United States to eradicate the Islamic State in Iraq and Syria rises several important questions. Among them the most important is: is this way of operating in the interest of European continent security?

Why accepting for European countries the United States government as the leader of this operation without any criticism when they know that it was the American war against Irak in 2003 that was the main factor of destabilization with the elimination of Saddam Hussein. The regime change after the Libya war in 2011 with the elimination of Kadhafi (with the active help of France and UK in 2011) and the goal of regime change in Syria only added to the current chaos.

It would however be useful for Europeans to assess past failures in which many of them were also active (especially in the coalition of the willing in 2003), ask the United States to commit itself to a real global strategy, and enlarge the coalition through the United Nation Security Council before to commit themselves to military action.

What is the real political goal of the operation ?

Is this operation an opportunity for the American president Obama (and its main European allies) to try to reestablish American influence in the Middle East after the Syrian fiasco?

Is the real target the elimination of the Islamic State, or is it the removal of Bachar el Assad in the longer term?. The French Foreign Affairs Minister Laurent Fabius[1]  again stressed that after the fight against the Islamist State, the goal of removing Bachar el Assad is still on the agenda and the “moderate opposition” should be supported. But where is the moderate opposition? Mr Fabius therefore continue to weaken French diplomacy in this region and transform the “Arab policy” doctrine from the general de Gaulle based on a support to Arab laïc Nation-States on the French model into an incoherent mixture of Islamist and moralist policy (fighting Djihadists in the Sahel region, supporting opposition to Bachar el Assad in Syria composed mainly of Islamists).

The way the operation is managed raises suspicion for the Russian government and this is problematic for the long term eradication of the Islamist extremist waves in this region as it should be in the common interest of the United States, European Union Member States and Russia to coordinate their actions.  In reality, it may need too much time (may be years) to form viable opposition to the current Syrian president. The Western flirtation with the Syrian radicals created a terrible monster in the region.

The first weeks of Western operation against the Islamist State also showed a worrying low level of efficiency: just several dozens of fighters were eliminated meanwhile many civilians and objects of civil infrastructure turned out to be under fire. There is a paradox when the members of the coalition had accused Bachar el Assad before to bomb civilians (which are used by terrorists as a shield like in all asymetrical wars).

There is also the suspicion that the Western countries try to contain the Islamist State but use also Islamists in other theater of operations to weaken the other great powers like Russia or China.

The need for a real strategy

By unleashing this military adventure, the West takes the risk of leading the whole region into chaos. The “war on terrorism”, as the former French Prime and Foreign Affairs minister Dominique de Villepin commented gives legitimacy to the Islamist State, has the effect to rally the Sunnis populations, and gives an opportunity for States in the region like Turkey and Saudi Arabia to pursue their own hidden objectives[2].

First, a right diagnosis on the geopolitical evolutions of the Middle East and North Africa zone should be a precondition to action.

There are major dangers in this current geopolitical situation:

-As Carlo Facci (researcher and Middle East expert-Brussels) has demonstrated[3], the international balance of power in the middle East  comes from the Skykes-Picot agreements in 1917 and the redefinition of this balance would hurt European interests and would lead towards a new redefinition of power in favor of Islamist forces.

The absence of a real inclusive geopolitical strategy between European Union Member states, United States, Russia and regional powers, but also the amazing lack of support to Christian minorities in the region is going against European interest in the long term.

-A longer term time bomb is the Islamist proselytism by the Gulf allies of the American, French and British governments in the MENA region but also in Europe. Future manipulation of Muslim extremist among European minorities after years of uncontrolled immigration, multiculturalist policies and unconditional support for Arab revolutions will be tempting for the States with Islamist tendencies in the arc of crisis on the Southern European flank.

There is an overall lack of global strategy to eradicate the Islamist movements but also its global roots. This objective require discussions in the UN, broader coalition with Russia and China who have a common long term interest with European and American governments in negotiating a global strategy. It is also necessary for Europeans to distance themselves from moralist or ideological doctrines like the promotion of Western democracy. As globalization means renewed rivalry for geopolitical spaces between a multitude of powers and actors, the balance of power doctrine is the adapted method to achieve security and stability. This new approach suggest to promote a balance of power between the Sunni and the Shia (it means a reset of relations between European States, Iran and Syria) and include all regional actors in the negotiations as this would also help to reconcile the different  visions.