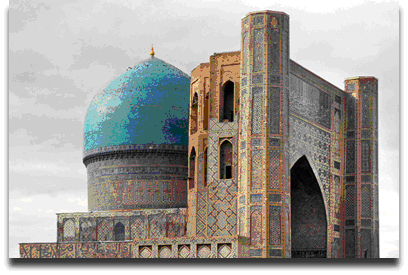 TIMURID RENAISSANCE: THE ERA OF REVIVAL OF ART AND SCIENCE IN CENTRAL ASIA

The Timurids are the descendants of Timur (Tamerlane) who was the emperor of the Timurid Empire (today’s Uzbekistan) in the 14th century. The empire bequeathed by Timur gave birth to a century-long renaissance of culture and arts, of which Samarkand was the jewel.

It was Shah Rukh (Shahrokh Mirza), son of Emir Timur, and his wife Goharshad Begim who initiated the Timurid Renaissance. In Samarkand, he developed a brilliant artistic, cultural and scientific policy that spanned the entire 15th century.

The Timurid dynasty in Central Asia led to a revival of art and science. Some said that it had the same splendor as the Italian Renaissance. « Combining military activity with artistic patronage to suck great effect that the fifteenth century came to be known as the era of the Timurid renaissance, a match in glory for the Italian Quattro centro. » Ruggiero, G. (2007).

Shahrokh Mirza and his wife attracted to the Empire and to their court, artists, architects, philosophers and poets recognized today among the most famous in the world, including the poet Djami. Their eldest son, Ulugh Beg, governor of Samarkand, was an outstanding astronomer.

The reconstruction of Samarkand, Herat (equivalent to the Florence of the Italian Renaissance), the schools built by Ulug Beg (grandson of Emir Timur), the development of poetry and literature can summarize the Timurid Renaissance.

Large-scale building projects were created and implemented, and mausoleums, madrasas were built. Mathematical and astronomical studies were revived, and firearms began to be mastered in the early 16th century. The city of Samarkand became an important stop on the Silk Road linking China to the West (DICKENS M. 1999).

Timur was not only a great conqueror, he was also a great builder. What is most striking about Timur’s monuments is their grandeur. Timur built both secular and religious monuments and gardens in his capital, with elaborately patterned stone walls and floors and palaces decorated with gold, silk and carpets.

The city of Herat became an important center of intellectual and artistic life in the Muslim world during this period. Samarkand was a center of scientific research and became the center of the Timurid Renaissance due to their constructions during the period.

The main works of the Timurid period are the construction of the Summer Palace, the Bibi- Khanym Mosque and the Registan. Not to mention that the Taj Mahal, one of the wonders of the world, was built by the Mughal emperor Shah Jahn, a descendant of Emir Timur.

The Registan is the ancient heart of the city of Samarkand and was described by Lord Curzon, the Viceroy of India, in1888 as « the noblest public square in the world« . « I know of nothing in the East which approaches it in its massive simplicity and grandeur, » he wrote. ‘No European spectacle can indeed be adequately compared with it, for we are unable to point to any open space in a Western city which is commanded on three of its four sides by Gothic cathedrals of the finest order.' » (Blunt, W. 1973)

Ulugh Begh, grandson of Emir Timur, astronomer and mathematician, more scholar than military or religious leader, left an educational institution as his main contribution to the architecture of Samarkand. Ulugh Beg adorned Samarkand with splendid monuments and parks.

The madrasa of Ulugh Beg was a scientific institution at that time. In fact, between 1424 and 1429, Ulugh Beg had the Samarkand Astronomical Observatory built, which was equipped with astronomical instruments that had no equivalent until then (Golombek, Lisa and Donald Wilber, 1988).

The decoration of the madrasa, like everywhere else in Samarkand, emphasizes the color blue, with light and dark blue tiles. Indeed, blue is ubiquitous in Samarkand. The faience mosaic above the entrance in a star-shaped design pays tribute to astronomy.
The ruler Ulugh Beg, great symbol of the Timurid Renaissance, contributed to science and it is to the quality of his trigonometric tables that he owes his place in the history of mathematics. Therefore, to pay tribute to him, in 1961, the International Astronomical Union named a lunar crater after him and an asteroid (2439) Ulugbek (Minor Planet Center, the International Astronomical Union).
Miniature paintings have a great place in Timurid art. Painting was not limited to papers, as many artists of the Timurid period painted complex murals. Timurid art was even reflected in Anatolia. Marthe Bernus-Taylor (1997) wrote « The decoration of the « Green Complex » in Bursa, a reflection of Timurid art ».

The originality of the Timurid cultural movement is that it contributed to the development of Chagatay to such an extent that the language was even learned by some Ottoman sultans (Ortayli, I.) This allowed Babur, descendant of Amir Timur and first of the Great Moguls, to write his life, the Baburnama, entirely in Chagatay Turkic language (Maria, E. Subtelny 1994).

Women played a significant role in political and economic life under the Timurids. (Mukminova, R.) Mukminova wrote that women occupied a rather important place in the court of Amir Timur and the Timurids. They took part in the festivities where high dignitaries, ambassadors,…, participated in the construction of mausoleums, madrasas, women became managers, etc. (T.Fajziev, 1994).

Like the Western Renaissance, the Timurid Renaissance developed through science, art, architecture, etc. There is no doubt that polymathy was commonplace in Central Asia during the Timurid Empire. In the end, this era left its mark on history, and anyone who has seen or will see these Timurid monuments in Samarkand can easily testify to the splendor they possess, even after years of decay, and imagine the grandeur of the old days, which many admirers of history are full of praise.