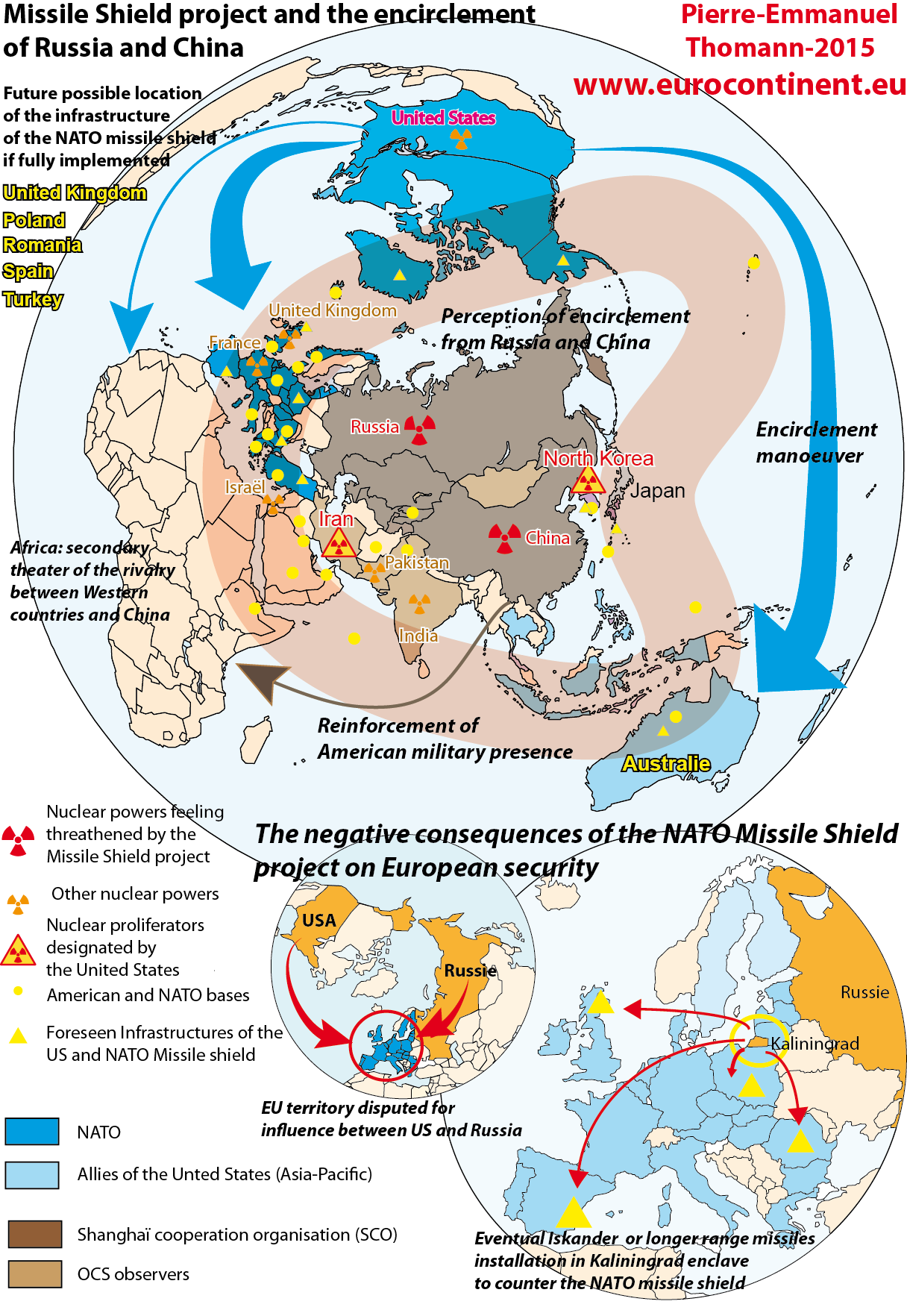 As largely expected, the unilateral withdrawal of the US from the Anti-Ballistic Missile (ABM) Treaty in 2002 and the inexorable pursuit of the US missile defense shield project that extends itself to the European territory within the framework of NATO has seriously destabilized the international security system. It provoked Russia’s reaction and this negative development puts the European territory at the forefront of the new confrontation between the United States and Russia.

Indeed, President Vladimir Putin’s speech to the Federal Assembly of the Russian Federation on March 1, 2018 announced that Russia possessed a range of new weapons to deal with the US anti-missile shield. The US anti-missile system has been strengthened by the opening of new bases in Europe near Russia’s borders in Romania and Poland and forms a belt of military bases and shield platforms in Alaska and California on US territory and Japan and South Korea in Asia, so all around the Eurasian continent.

This Russian reaction is not only aimed at responding to the extension of the  missile shield project. Its objective is also to restore the strategic balance after the relaunch of the nuclear arms race by the United States confirmed by the latest strategic nuclear review (NPR) of February 2018. This document announces an increase in expenditure of more than 611 billion dollars, that is the highest expenditures in the world (higher budget than  the next following 8 major countries together). It also forecasts the development of more flexible nuclear weapons, which could lower the threshold for nuclear use. It is also related to the discussions in the United States of a possible withdrawal of the INF Treaty (Intermediate-Range Nuclear Forces Treaty) . The US government accuses Russia of violations of this treaty.

The  geopolitical context  shows an increase of great powers rivalry. Russia and China have been specifically identified as rivals by the United States in the new National Security Strategy of December 2017 (NSS). It also follows a continuous enlargement of NATO after the end of the Cold War, for almost two decades, to the territory of the former Soviet Union and ever closer to the territory of Russia. Russia, on the other hand, does not have military bases close to the American territory. The American defense system extends itself well over the European and Eurasian territory while Russia defends only its own territory and its geographical neighborhood, hence strengthening its  perception of geopolitical encirclement.

The Ministry of Defense and the Russian defense industries have developed a new intercontinental heavy missile system, named Sarmat, specifically designed to makes its interception more difficult by a missile defense system. It is equipped with powerful nuclear warheads including hypersonic ones,  and its large energy capabilities can hit targets anywhere via North and South Poles.

A new X-101 air-launched missile has also been designed to render the missile defense system ineffective. It is a low-flying stealth missile with a nuclear warhead and unpredictable trajectory.

Russia has also developed a model of unmanned submersible vehicle, capable of moving at great depths, with a nuclear or conventional warhead. This is a new type of  underwater strategic weapon.

Finally, a high precision hypersonic missile system, with nuclear or conventional warheads, could bypass all missile and anti-aircraft systems at a range of over 2000 km has been developed. The Russian president also insisted on their credibility.

This nuclear escalation induces the greatest risk to the European nations.  In case of nuclear war, their territory  is becoming a geopolitical stake of the rivalry between the United States and Russia. The security of Europeans is becoming more and more dependent on American and Russian maneuvers. Europeans cannot defend properly their own interests and point of view, not only regarding Russian decisions but also to those taken by the United States. The American government is the ultimate decision-maker for the use of nuclear weapons in NATO. France and the United Kingdom have their own nuclear weapons, but they are not in proportion to Russian and American arsenals.

It is therefore urgent for Europeans to propose a  new strategic dialogue on European and global security, in order to bring an end to this new nuclear arms race. They could finally negotiate a new European security system, before they loose control of their geopolitical destiny. This initiative would be a timely response as the Russians have always stressed  they were ready to establish a dialogue in order to restore confidence, and not be obliged to take measures of escalation.