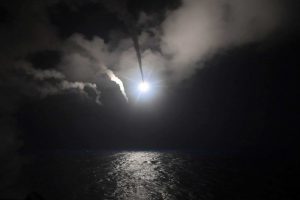 The punitive bombings raids in Syria on the night of April 14, 2018  carried out by the United States, the United Kingdom and France have been ineffective since they do not change the situation on the ground but also useless because they will not help Syria out of war. Nor do they help to speed up the fight against the Islamic State, which has been designated as the enemy of the three powers that have carried out strikes, but are targeting loyal Syria, the best bulwark against Islamists with the support of Russia and Iran .

These strikes mainly make up for a show of force, the bankruptcy of the attempted regime change in Syria of Western governments and seek to regain a foothold in the negotiations on the future of Syria, after being ousted after a fallacious geopolitical diagnosis of the situation. They were also challenged by the Russian intervention that could not risk the destabilization of its geographical proximity in the  Caucasus and Central Asia, by a domino effect of regime changes and the coming to power of Islamists. The Russians  announced that they were ready to retaliate, and this had the effect of limiting the operation.

With regard to France, they mark an alignment with the objectives of the USA as  promoters of the doctrine of regime change, especially since the end of the Cold War. The goal is to slow  multipolarity promoted by Russia by acting in concert with the interests of the Gulf countries and Israel against the Russia-Iran axis. France had only a role of minor ally, without any geopolitical strategy of sovereignty and balance in contradiction with the doctrinal heritage of  General de Gaulle. General de Gaulle conceived  the French national posture as a  point of equilibrium between different geopolitical spaces to preserve its margin of manoeuver and its independence. According to him,  the European project was a sounding board of French interests and a pole independent of the great geopolitical blocks, in order to preserve peace and stability.

The decision to take a military intervention was decided without waiting for the results of the OPCW investigation. The analyzes of French experts to justify the strikes were based on vague videos and photos viewed from Paris without investigating on the spot, and some interviews without guarantees of impartiality. Without  clear evidence  and without the approval of the Security Council, the decision to carry out bombings further weakens one of the last instruments that allows France to defend its interests in the world, in order to negotiate a better geopolitical balance in the emerging multicentric world. This decision, like the war in Libya, has divided the Europeans, since Germany, like other EU member states did not participate to the strikes. It risked fragmenting even more the relationship with Russia, which France needs for a better European and global geopolitical balance, but also with the Iran and  loyal Syria. These bombardments increased the risk of a direct military confrontation between Russia and the United States and  the dragging of Europeans into a more serious scenario that would have gone beyond Syrian theater and increased the likelihood of a nuclear confrontation.

In order to limit the political damage that will follow this strikes in the longer term and the loss of room for manoeuver of France, an initiative would be welcome to organize a space of solidarity and security from  « Lisbonne in Vladivostok »(mentioned in the new treaty German coalition), but also Euro-Mediterranean, to overcome this confinement of European members of the EU into an exclusive Euro-Atlantist space. 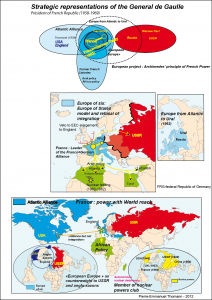