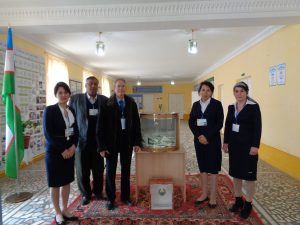 In connection with the death of Islam Karimov, the people of Uzbekistan are called before an early (extraordinary) presidential elections for December 2016.

First of all, the legal processes for both the temporary nomination for the vacant presidency and the organization of new elections  proves that the State of Uzbekistan is acting within the State of law, which was constantly consolidated since Uzbek independence. This is a proof, that the country is maintaining intact the course of maintaining stability of the country through an important and increasing set of laws and norms.

The system of organization of the presidential elections in Uzbekistan is also built on the basis of broad international experience in the elections since its politicians and administration  have examined  various international models, and adapted it to the specific needs of Uzbekistan

The Uzbek modernization is going very fast but the success of the Uzbek model is this rapid change find its source in its desire to keeping its roots strong and preserving its identity and traditions.

A democratic model is a mixture of international norms but also the influence of the national traditions, history and geography. Each country has the right to build its own democratic, economical and political model. The election process in Uzbekistan therefore reflects its specific model.

The Election of the President is important, as it is an  indicator of the degree of democracy development and the implementation of international norms and specific principles in the country.

For these next 2016 elections, the Uzbek state implements new  measures to further develop the legislative framework of the electoral system of the country, strengthen the independence and impartiality of the Central Electoral Committee in order to improve  the holding of presidential elections in full compliance with the electoral law, international norms and standards

This proves also that the Uzbek model of democracy and the processes associated like electoral laws is in constant evolution and is improving with time, with a "step by step" approach, in order not to rush into  democratic models completely  imported from abroad and no suited to Uzbek specific requirements.

The whole electoral process and  laws have to be considered in unity with economic, political and legal reforms being carried out in the country. By improving gradually its electoral process in synergy with  the promotion of  the "Uzbek model" of modernization,  Uzbekistan maintains  its "step by step " modernizing course  and is eager to build at the sae time strong legitimacy of its model among citizens.

Uzbekistan constant  modernizing course since its independence is a success model not be ignored when we sees the failure of many states in transition in the world in its geographical proximity.