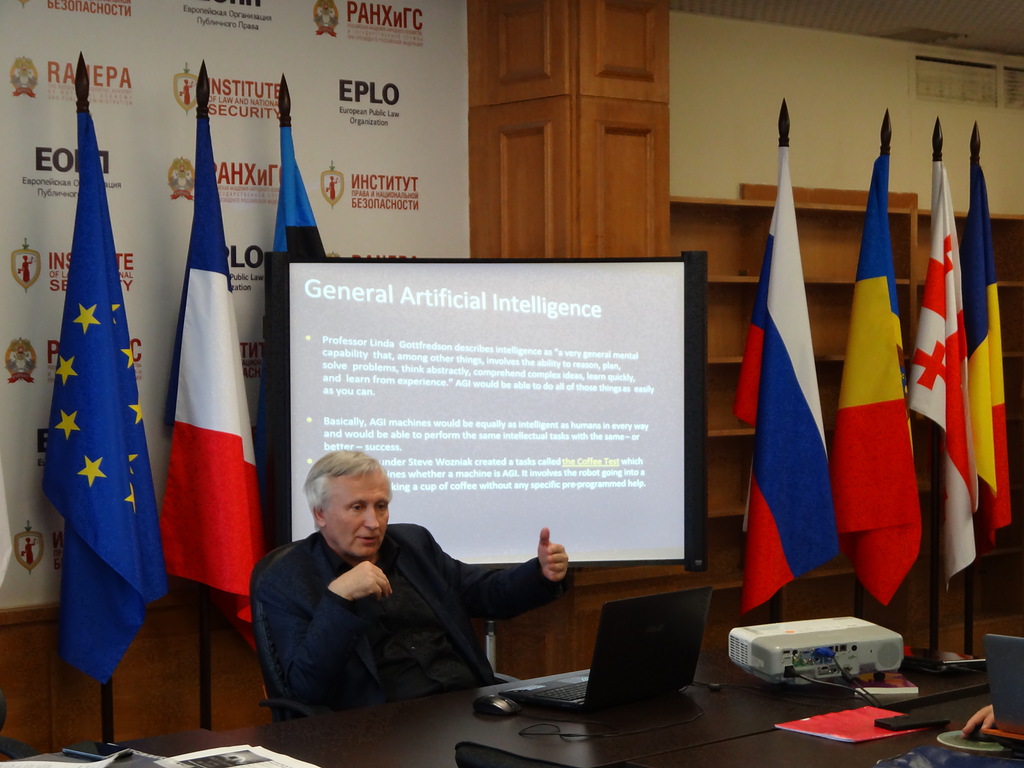 In 2019 an international group of experts on international psychological security (IPS) threats through malicious use of artificial intelligence (MUAI) has been formed and successfully collaborates in conducting joint research, international conferences and scientific seminars.The group members formed the panel group “The Malicious Use of Artificial Intelligence and International Psychological Security” [1] at the II International Conference “Information and Communication in the Digital Age: Explicit and Implicit Impacts”. The conference was held as part of the UNESCO Intergovernmental “Information for All Program” (IFAP) and the XI International IT Forum with the participation of the BRICS and SCO countries in Khanty-Mansiysk, June 9 – 12, 2019. The final document of the conference took into account the most important results of the group[2].The discussion of the problems of malicious use of AI continued on June 14, 2019 at the research seminar « Artificial Intelligence and Challenges to International Psychological Security ». The seminar was organized by the Center for Euro-Atlantic Studies and International Security of the Diplomatic Academy of the Russian Ministry of Foreign Affairs and the International Center for Socio-Political Studies and Consulting with the academic support of the European-Russian Expert Network of Communication Management (EU-RU-CM Network) and the Department of International Security and Foreign Policy of the Russian Presidential Academy of National Economy and Public Administration. The participants of the seminar adopted the final document “For Cooperation between Countries, Expert Communities and Civil Society Organizations against the Malicious Use of Artificial Intelligence and the Destabilization of the International Psychological Security and Democratic Institutions”and formed a working group on its implementation[3].

In early October 2019, the discussion of the problems of AI in the context of AI development in Latin America was held at the Ibero-American Forum in the framework of two panels: « New Opportunities of Artificial Intelligence and Social, Political and Psychological Challenges in Latin America » and « Information and Psychological Confrontation in the Modern World and Latin America »[6]. On different platforms we discuss the problems associated with the malicious use of AI. For example, on 9 October, my colleague from Argentina, Prof. Paulo Botta, and I presented our papers at the Diplomatic Academy on « The Drone Attack in Saudi Arabia: Global and Regional Implications »[7].

Later October 31 – November 1, 2019 at the « European Conference on the Impact of AI and Robotics « in Oxford, the discussion will continue on the mini-track « Harmful Use of Artificial Intelligence: New Challenges for Democratic Institutions and Political Stability »[8]. The discussion will also be continued during a series of speeches by prof. Pashentsev E.N. in London and Edinburgh.

The theme of AI, MUAI and IPS is the key one in books, prepared for publishing by the leading international publishers. The monograph “Strategic Communication in EU-Russia Relations: Tensions, Challenges and Opportunities”[9] among others issues analyzes the common risks of AI development. In the book “Terrorism and Advanced Technologies in Information and Psychological Warfare: New Risks, New Opportunities to Counter the Terrorist Threat  » with the participation of 18 experts from 11 countries (ed. D. Yu. Bazarkina, G. Simons, E. N. Pashentsev. Nova Science Publishers) one of the sections will be entirely devoted to information and psychological threats using AI coming from terrorists, and methods to neutralize them. At the end of 2020, it is planned to present a collective monograph on « Artificial Intelligence and Threats to International Psychological Security ».

Publications in academic journals of detailed reviews of the speeches of experts on the problems of international psychological security, contribute to a wider dissemination among specialists of a new direction in the field of international security[10]:

In the coming year, Russian experts of the Group in the field of research on the effects of MUAI on IPS are scheduled to speak only at foreign scientific events in UK, Mexico, Cuba and other countries.

Numerous publications in the media over the past two years have also contributed to the dissemination of ideas about existing and future threats of IPS through MUAI and methods of their neutralization:

·       reviews of the author’s scientific research of the members of the international group[11] ·       group members’ presentations at scientific and practical events on AI and IPS over the past two years in Russia, Czech Republic, Italy, Belarus, Morocco, Macedonia, France, Uruguay, Romania, Argentina, Brazil, South Africa, UK[12] ·       interviews with group members in Russian, English, French, Spanish, Italian, Romanian, Chinese, published in Russia, Morocco, Spain, Romania, Argentina, Italy, Cuba, Ecuador, France and other countries with at least 800 reposts on the pages of news agencies, University websites, professional blogs. PURE systems[13]  at St. Petersburg state University and « Truth » at Lomonosov Moscow State University, RLASSA and EU-RU-CM Network[14] effectively to represent media coverage of scientific achievements in the field IPS and MUAI. What is very important, the practical activities of the members of the group are already reaching those moments of public life and international cooperation that are directly related to the possible risks of MUAI. Thus, Dr. Pierre-Emmanuel Thomann, by the invitation of the Association  » Independent Public Monitoring « , participated as an election expert in the mission on the occasion of regional and local elections in Russia in September 2019. Being in Moscow, he participated in the meetings of the Electoral Commission, the Election Observation Commission, as well as visited polling stations on polling day. According to Dr. Thomann,  » Russians are very aware of the debates, controversies and reluctance of electronic voting and digitization of society in the European Union (the Netherlands has abandoned electronic voting). Russia decided to accept the challenge to gradually improve the system. Russia is now positioning itself as a European and global laboratory of digital democracy.[15] » In the conduct and organization of elections in the near future should be expected to increase the risks of MUAI. It is better to confront these challenges by relying on broad international cooperation rather than confrontation.Thus, it can be stated that the problems of international psychological security in the context of threats to MUAI were fixed at the initial level of perception of the international scientific community and wider groups. Cooperation of specialists on the issues of MUAI and IPS is successfully developing through international associations: the European-Russian Expert Network of Communication Management and the Russian-Latin American Association for Strategic Studies[16]. Thus, it can be stated that the problem of international psychological security in the context of threats to the MUAI has become entrenched at the initial level of perception of the international scientific community, as well as, although to a lesser extent, in the business environment and among those, who are involved in the development and adoption of government decisions. The project of creation of the international research center « Artificial Intelligence and Problems of the International Information and Psychological Safety » is prepared, its realization will demand time, first of all, for the financial reasons. Group Coordinator                    Prof., DSc.   Evgeny Pashentsev

[3] For Cooperation between Countries, Expert Communities and Civil Society Organizations against the Malicious Use of Artificial Intelligence and the Destabilization of the International Psychological Security and Democratic Institutions. The Final Document of the International Research Seminar “Artificial Intelligence and Challenges to International Psychological Security” Diplomatic Academy of the Ministry of Foreign Affairs of the Russian Federation. Moscow, June 14, 2019. // Geopolitica Estului. 11.07.2019. URL: https://geopoliticaestului.ro/for-cooperation-between-countries-expert-communities-and-civil-society-organizations-against-the-malicious-use-of-artificial-intelligence-and-the-destabilization-of-the-international-psychological-se/ (accessed: 14.09.2019).