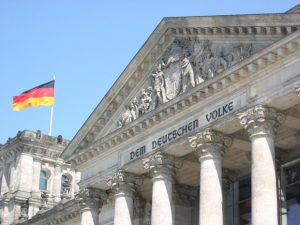 German parliamentary elections were marked by a deepening fracture of the political landscape, and a rise to power of parties wishing to defend vigorously national interests in the European Union.
The mainstream parties, the CDU, the CSU and the SPD suffered significant losses as a consequence of a mounting refusal of German citizens to modify their nation under pressure of mass immigration after the opening of borders in 2015 by Angela Merkel, with the subsequent Islamist attacks, and increase in the number of working poor as a result of liberal economic reforms.
At the national level, the particularly high score of the AfD party in the east of the country, with 12.6% at the national level, and 21.5% in the former East Germany, indicates the tendency of existence of two communities in one nation despite the reunification.
Although Angela Merkel's party achieved the highest score about a third of voters (32.7%), it is just a quarter of the electorate ( 25.1%) due to abstentions. Subsequently, a coalition must be negotiated to form a government with the renewed mandate for Angela Merkel as a chancellor. The negotiations are expected to be at most complex, and the likely configuration is a coalition between the CDU, the CSU, the FDP Liberals and the Greens, since Martin Schulz announced that the SPD is not interested to renew a grand coalition, and no party agrees to form an alliance with the AfD.
However, the liberal FDP, which obtained 10.7%, declared as soon as the results were announced, its refusal of automatic financial transfers in the European Union. This red line for the negotiations of a coalition of government is a major obstacle to the Franco-German and European stimulus plan proposed by the French president Emmanuel Macron who nevertheless reaffirmed his vision the day after the German elections.
Macron's desired relaunch of the integration of the Eurozone should be understood according to a geopolitical reading grid and not only economic, as it touches on the major question of power-sharing in EU between Germany and France.
The Franco-German split in relation to the euro area is not a cyclical political problem. Since the creation of the euro, the successive French governments have always wished to crown the euro zone with an economic government to get an effect of rebalancing respecting Germany with the mechanical preponderance of the 17 countries of the South in the euro zone. The French president is therefore proposing a multi-speed Europe with a vanguard in its center consisting of a parliament, a budget and a minister for the euro zone.
From their behalf, Germans, positioned at the geographical center of the EU since reunification and the enlargement of the EU, do not wish to cut their eastern and northern flank. Their interest also lies in exporting the ordo-liberal rules in the EU27.
German elections confirm that there is no consensus in Germany to move towards a "Transferunion", which is the German perception of financing of the countries of the South by Germany through the solidarity mechanisms of the EU and under the impulse of an economic government, a mini-parliament and a budget of the euro zone, according to the French vision . The liberal reforms undertaken by the French government to regain the confidence of the Germans in exchange for a strengthening of the euro zone could be summarized as a set of dupes.
The announced revival of the Franco-German couple will not cause a qualitative leap in the European Union, because the engine of the European project is precisely the Franco-German geopolitical rivalry but also its limit! The French President's program for the euro zone is therefore largely illusory, unless the German government gives it a hand in favor of symbolic institutional innovations to please the French, but masks the preponderance of German conceptions as regards the euro area and the European Union.
In case a compromise is finalized at the end of a new Franco-German arch, it is likely that there will be a strengthening of the Franco-German asymmetry in favor of Germany at the center of the geopolitical power of the European Union, even if it can be partially compensated by a timid revival of European defense projects favored by the French vision.

This growing geopolitical imbalance within enlarged European Union will increase the uncertainty about the future of the European project in its present form, since its main objective was precisely to maintain the Franco-German geopolitical equilibrium. 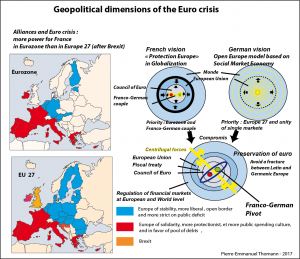