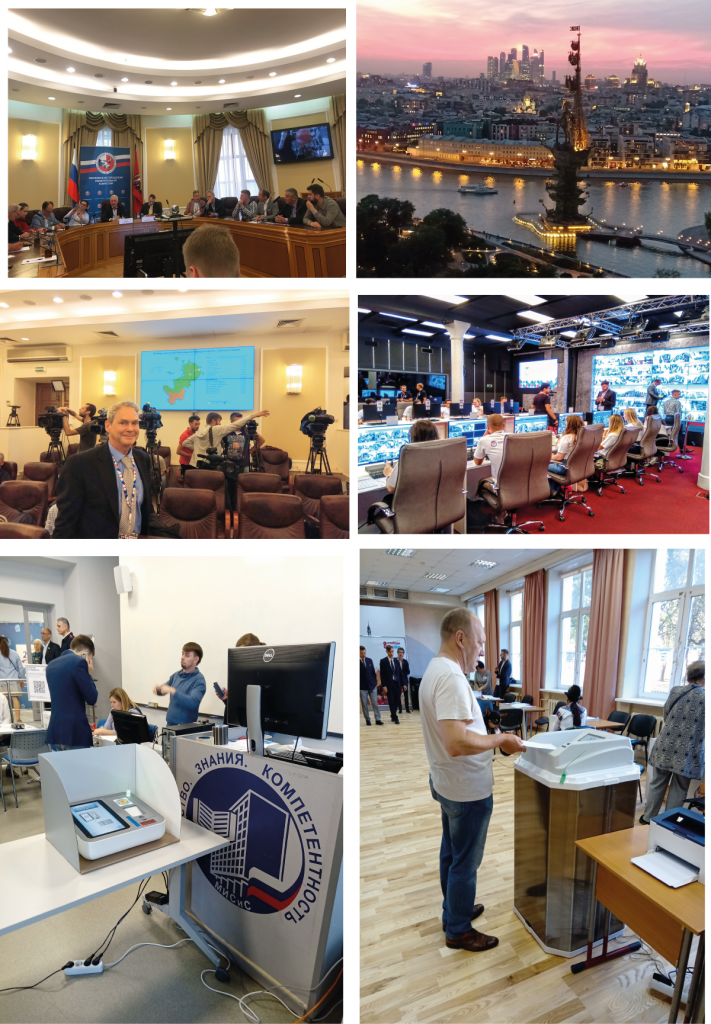 The local elections in Russia with a single voting day on the 8th of September 2019 has included more than 5,900 election campaigns and votes in all Russian Federation regions, including additional elections of deputies of the State Duma and elections of  Heads of 16 regions. For the first time an experiment on electronic voting via the Internet has been also conducted in Russia on a voluntary basis (citizens had the choice between the classis option of the new electronic test).

I was invited by the association « Independent Public Monitoring »[1] to participate to a mission of international experts for the elections in Moscow region, and in particular for the Moscow Duma (mission not to be confused stricto sensu with the status of « observer »). I participated with my colleagues in meetings at the Territorial Election Commission,  the Moscow City Electoral Commission, the Community Headquarters of Election Monitoring,  and  the Election Oversight Committee[2]. I also visited polling stations on election day, to see  how the data were being processed and the results will be tabulated,  and participated to the  “ Elections Night”, with  results, debates, round tables with the Media and bloggers.

Here is a summary of my reflections on this experience.

An electoral system is not only a technical tool of a nation’s model of democracy, it is also a reflection of the soul of that nation, as well as its internal and external geopolitical determinants. Each nation develops its own model of democracy, depending on its geography and history, and it is in constant evolution, especially with  the scrutiny of associations of Russian civil society, the internal political debates, and the  open interaction with foreign experts in electoral matters or scientists from public or private organization (especially for  new  technologies in the digital sphere).

In Russia, the internal geopolitics of the country is characterized by the vastness of the territory. Russia has the largest territory in the world and this factor exerts an unprecedented constraint on the electoral system. Computerization and digitization with electronic voting will allow remote voting. The challenge of the geography of Russia seems to me to be the central issue and the most important factor that justifies the digitalization of the electoral system. The introduction of electronic voting is also intended to improve the electoral system and increase the participation rate which is  quite low, especially among young people for regional and local elections, as it is the case in all European countries. In this regional election, nearly 90% of citizens who registered to use electronic voting participated in the election. So the introduction of e-voting was a success. The general participation rate increased slightly compared to 2014, it remained stable in Moscow, but was higher outside cities. In order to significantly increase participation rates with e-voting, the results will have to be appreciated over long periods of time, as happened in Estonia, with gradual trust. Electronic voting is also a tool against electoral fraud. Since the information is stored on a computer, it is also used to ensure that no ballots are removed or added from the ballot boxes before the counting.

The digitalization of the world is inexorable and digital electoral systems will increase in the world Russia has chosen the option of accompanying this digitalization, rather than slowing it down, knowing that countries that want to keep control of their destiny and sovereignty are moving very fast in this direction. Russia, a well know great scientific nation, is therefore betting on science to combine democracy and digitalization. Russian citizens, experts and politicians are very aware of debates, controversies and  some reservations about e-voting and the digitalization of society in some countries of  the European Union (the Netherlands has abandoned e-voting). Russia has decided to take up the challenge to gradually improve the system. Russia is now positioning itself as a European and global laboratory for digital democracy.

-The creation of a public commission for the observation of elections (, a kind of supervisory Commission, chaired by Alexsey Venediktov, who is a journalist known for his criticisms on the radio Echo of Moscow regarding Russian political life.

-Inspiration from foreign experiences, such as the Estonian model in particular.

– Giving a challenge to international experts to  try to crack the system and test its reliability. Electronic voting is associated with an encryption key that guarantees the secrecy of the vote. It is based on blockchain technology. When  analyzing the results, computers give the participation rate obtained with the counting of electronic votes and separately, the result of the vote by respecting its anonymity with the use of an encryption key. To open the vote, you must apply a decryption key. Pierrick Gaudry, a French CNRS[3] researcher at the Laboratory for Research in Computer Science and its Applications (CNRS / Inria / University of Lorraine) took up the challenge and discovered a flaw in the quality of the encryption of electronic voting data. This flaw was based on the size of the encryption key. Since the publication of its article (https://arxiv.org/abs/1908.05127) on August 14, 2019, the system has been improved by Russian election organizers and for the election test of September 8, a new protocol with a longer public key was introduced. Pierrick Gaudry will receive a financial reward for this work. With this open challenge given to foreign experts, the system could improve and play  the role of international laboratory in Europe and in the world. This system of electronic voting that will be increasingly reliable, the theoretical risk of hacking becomes much lower than the risk of irregularities with paper bulletins.

– Lastly, the mission of the international experts in which I have took part, made it possible to see in real time the conduct of the elections. The external geopolitical issues of digital democracy are also very important. In the context of growing rivalry between powers, USA, China, Russia … The digital space of a nation is combined with with its positioning on  land, sea, air and space.

To preserve the security of the information space, it is important for a state to master its digital space in order to  avoid the malicious use of digital technologies by private and criminal actors, but also interference of competing digital empires. States that do not develop their own pool of skills and expertise in the field of digitalization and data storage (Big Data) including the electoral system, risk becoming dependent on other states, or even subject to destabilization and manipulation. It is also an issue of sovereignty. With the digitalization of elections, there are new risks of potential Artificial Intelligence (AI) manipulations of the elections. To obtain truthful electronic voting, national technological and political sovereignty is necessary. This is why new digital electoral system need to be constantly improved.

Regarding my mission, I visited polling stations in Moscow equipped with electronic ballot boxes (an mobile ballot boxes) and counting machines compiling results from electronic ballot boxes, including internet voting introduced also as a test. What struck me was the high degree of technological sophistication with the use of digital technologies, the efficiency of the organization of these elections, and the great transparency at the national and international level and this was shared  by my foreign experts colleagues. Polling stations were constantly under video surveillance to ensure transparency and the Monitoring Committee was equipped with multiple screens to centralize information and act quickly in the event of a complaint, irregularity or incident.

Moreover, thanks to the site https://nom24.ru/, all citizens could follow live the voting process and report irregularities. I was able to interact with the very numerous Russian observers but also foreign experts, from parties, NGOs and even private companies in the field of communication and information technology which were present in the offices, notably on the degree of security of the encryption vote to ensure the anonymous vote. This is how the Russian experts explained to me the improvements made on the advice of Pierrick Gaudry, CNRS researcher.

Meetings with Russian officials at the Electoral Commission and the Supervisory Commission also provided an opportunity to exchange ideas about potential flaws, challenges, but also the potential for international cooperation in this area. In the emerging multicenter world, there is no single source of inspiration or stereotypical pattern of democracy. Russia and other European countries have an interest in exchanging information among themselves and responding to common challenges while respecting their specificities: we can mention :

– the awakening of young citizens to electoral issues to increase participation,

– the strengthening of digital sovereignty with the storage of electoral data – the creation of missions of electoral experts in a reciprocal mode:  Russian experts visiting other European countries and  experts from EU countries in Russia

–  reinforce international dialogue on digitalization of electoral systems through internationals forum such as the UNESCO International conference “Tangible and Intangible Impact of Information and Communication in the Digital Age” taking place each year in Khanty-Mansiysk in the Russian Federation within the framework of UNESCO’s Information for All Programme and the XI International IT Forum. [4]

– foster international cooperation on  the issue of potential malicious use of artificial intelligence (AI)  in digital electoral systems. The creation of an international or European center on IA with large research spectrum  characterized by transdisciplinarity, including digitalization of elections, would be very useful and was mentioned in the Ugra declaration 2019: « The establishing of an international network of research centers for a better understanding and counteraction to these threats is also desirable. »  as a result of the UNESCO International conference “Tangible and Intangible Impact of Information and Communication in the Digital Age”  mentioned previously.

Russia is developing an expertise that will be useful to all Europe as a laboratory for digital democracy.

[1] The Association “Independent Public Monitoring” (IPM) is formed of different non-governmental organizations and movements that also includes lawyers, political scientists and electoral law experts and it is open for any other inclusions.

-The main aim of the Association is to assist in the implementation of citizens` electoral rights and prevent conflicts through all-round monitoring of electoral process.

-The Association has directed more than 90 000 citizen observers to polling stations of all regions of the Russian Federation at the presidential elections in Russia 2018.

Information coming from observers went to the internet portal nom24.ru and the NPM application is available at Google Play Market and AppStore. With assistance of this application observers reported about problems and violations that happened at polling stations, got assistance from colleagues and experts, analyzed situation at all polling stations, made video-observation and provided data of final protocols and results of parallel counting.

-Before election day on March 18, 2018 9 online trainings were held for representatives of NPM, the audience of which consisted of more than 50 000 trainees. One of the trainings became the largest webinar for specialists in providing electoral procedures organized by NPM where more than 30 000 participants attended simultaneously. During this event the record in the category of the largest online voting awareness lesson was set up and registered in the Russian`s records book.

-During the presidential electoral campaign 2018 3577 messages were received by portal nom24.ru and its service “The map of messages”. The representatives of NPM assisted in solving 1612 problems and recognized that 1518 problems were fakes.

[2] These meetings were in format of panel discussion where experts could have the opportunity to share the practice of holding elections in their countries and to express their opinions regarding new technologies on what they have seen in Russia.