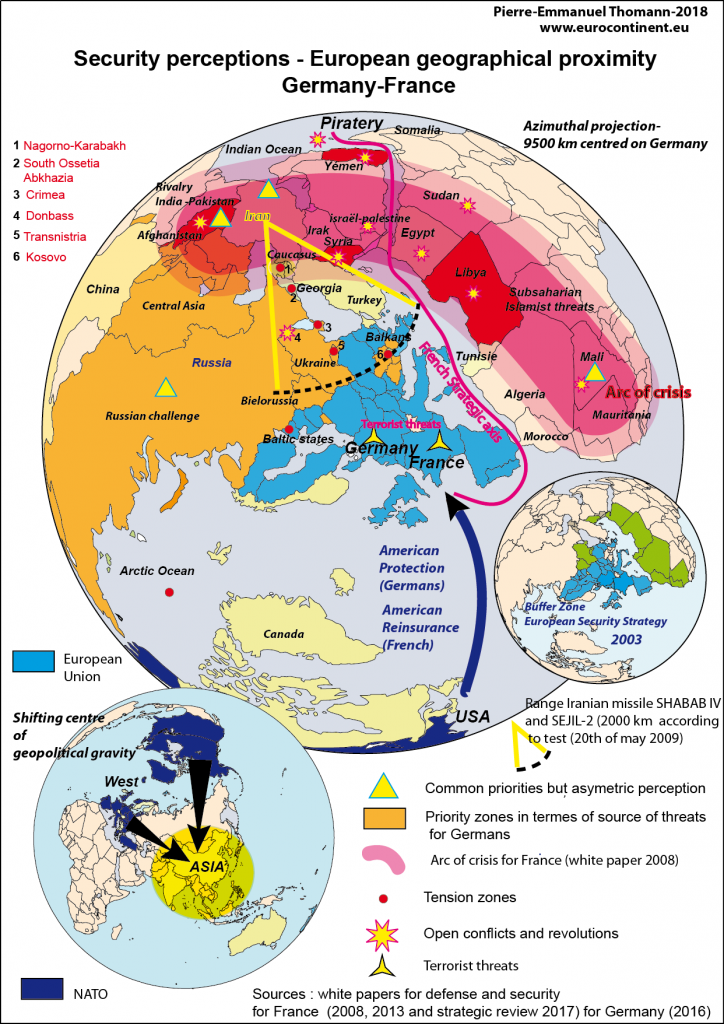 The idea of ​​creating a European army is today a convenient utopia. French President Emmanuel Macron has spoken out in favor of the creation of a « European army », on the occasion of the commemoration of 11 November 1918 in Paris, and German Chancellor Angela Merkel supported this idea. Emmanuel Macron’s statement on the « European army » should be seen as a political slogan in the run-up to the European Parliament elections of May 2019. It does not reflect nor the true French position nor the German one.  Let’s also examine this proposition from the geopolitical point of view. In reality, Germany and France have different strategic priorities because they have different perceptions of threats (see map on the perceptions of threats of Germany and France).

Although France and Germany are active in all the different ongoing initiatives to foster more cooperation on defense  in Europe, they have different priorities.   The French president is promoting joint military operations in the Mediterranean region, in the Middle East and in Africa and is looking for the support of other Europeans. For the French the threat comes mainly from the southern flank,  with Islamic terrorism. The eastern flank of Europe is for them of secondary importance On the contrary, Germany is concerned mainly about security on the eastern flank of Europe. For Germany, which has always been part of the integrated military structure of NATO, the European army should be a pillar of the Atlantic alliance. The Germans are mainly in synergy with the geopolitical interests of the United States to contain Russia.

It is for this reason that Germany gives priority to the ongoing structured  Permanent Structure Cooperation (PESCO) between European Union member states in the field of defense and security, in order to implement joint projects in synergy with NATO’s priorities. They also focus on the concept of  framework-nation within NATO and position themselves as leaders for integration  of the Central and Eastern European armies, together with the United States. Germany is wary of Emmanuel Macron’s idea of ​​a European intervention initiative (EI2) , because it is supposed to be autonomous from both the European Union and NATO. Although they provide some support, the Germans do not wish to be sucked into operations they perceive as cover for French interests in the Mediterranean region and in Africa.

The French President is also influenced by Euro-Atlanticist priorities, and this is why he believes that European cooperation in the field of defense must be compatible with NATO, but with a greater degree of autonomy than Germany. According to the vision of « Europe Puissance » (Europe as a global and military power), France is promoting cooperation in the military field between sovereign member states, in order to reach European leadership.   In the current geopolitical context, the idea of ​​a European army could not work because Europeans would find it very difficult to agree on a integrated military command. In particular because France is a nuclear power, but not Germany. France, unlike Germany, is also a permanent member of the United Nations Security Council. Moreover, the decision to send soldiers who risk their lives is only possible within the framework of a national decision, since there is no « European nation ».

The future lies more in rather fluid and variable alliances and Coalitions of the Willing according to different strategic objectives and geographical theaters. Cooperation between member states of the European Union on defense issues is already difficult enough. It is not necessary to add  utopian objectives. Speaking of a « European army » is a convenient utopia, and useful to hide the absence of real debates on the divergent geopolitical visions between Europeans, and particularly between Germany and France. In order to progress on the path of closer cooperation in the military field, parallel work is needed to bring together divergent views on geopolitical diagnosis, perceptions of security and identification of common interests.  This would finally open the way towards a deeper dialogue on European’ aims.