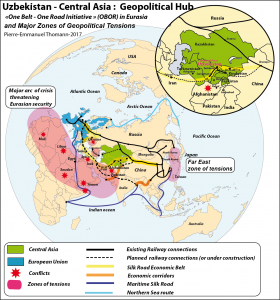 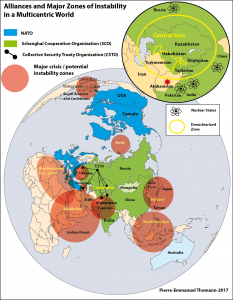 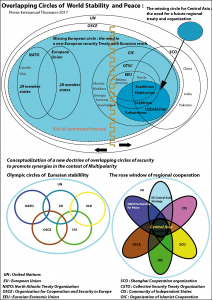 After many years dedicated to the consolidation of the Uzbek nation-state under the presidency of Islam Karimov since its independence in 1991, a new direction is taken by the new Uzbek president Shavkat Mirziyoyev to accelerate reforms at the national level, but also to foster cooperation at the international level.

Uzbekistan is now focusing particularly on Central Asian cooperation. The new Uzbek president has visited Turkmenistan, Kazakhstan and Kyrgzstan since his election in December 2016. Direct flights from Tashkent to Dushanbe in the neighbouring Tajikistan were also resumed, as a start to work on mutual trust.

The Uzbek government is at the same time looking for support and collaboration from all of its partners including states, international organizations, and NGO’s. The stakes are high, since this initiative, if successful, could not only bring regional stability, but also become a new geopolitical laboratory for Eurasian stability and peace. A new doctrine could be experimented with during the development of this new process of regional rapprochement in the context of a growing multicentric and interdependent world.  It would gradually promote synergy between the different actors through overlapping institutional circles (Olympic circles of security) on the Eurasian continent and at global level to balance different interests, contain conflicts, promote cooperation, and achieve security, prosperity and peace.

An International Conference on Security and Sustainable Development in Central Asia under the auspices of the United Nations « Central Asia: Shared Past and Common Future, Cooperation for Sustainable Development and Mutual Prosperity », has been organised on the 10th and 11th of November 2017 to add some flesh to this new approach and raise awareness among the international community to its great geopolitical stakes.

This high profile conference is a direct consequence of the great ambition of the precedent government who welcomed high level meetings of international organizations.  The Uzbek government hosted an anniversary session of the SCO Heads of States Council in Tashkent on 23-24 June 2016 as the presidency of the Shanghai Cooperation Organization SCO) was held by Uzbekistan for 2015-2016, and hosted the 43rd session of the Organization of Islamic Cooperation (OIC) Council of Foreign Ministers, on 18-19 October 2016 in Tashkent, under the motto “Education and Enlightenment – Path to the Peace and Creativity”.

The idea is achieve more stability and improve security in the Central Asian region through regional cooperation in order to take full advantage of the potential of this region. Security has to be understood as being a very wide concept that includes hard security, but also economy, energy, environmental issues, demography, technology, culture and identity. The main objective is to transform Central Asia into a geopolitical hub.

A non-exhaustive list of thematic concerns that are on the agenda in the context of Central Asian cooperation includes the following:

The issue of unresolved borders is central and needs to be addressed between Central Asian states in order to progress to a more cooperative agenda. Tajikistan and Uzbekistan’s joint inter-governmental commission met in Dushanbe in May 2017 to discuss the country’s unresolved borders. President Shavkat Mirziyoyev’s two-day visit to Kyrgyzstan concluded in September 2017 with the countries agreeing on the delineation of about 80% of their common border.

Central Asian states also need to contribute in a more coherent and collective manner to maintain stability in Central Asia, in order to prevent a spill-over from external security threats, mainly from Afghanistan and project stability in neighbouring regions. They also have to contain regional geopolitical rivalries since they face the same problems like international terrorism, religious extremism, transnational organized crime and drug trafficking. They therefore need to bolster initiatives such as the UN Regional Centre for Preventive Diplomacy for Central Asia (UNRCCA) created in 2007

An objective of the Uzbek government and its Central Asian partners is also to transform its territory into a geopolitical hub for Eurasian transport, energy and commercial corridors (map: Uzbekistan – Central Asia: Geopolitical Hub).  This would contribute to regional economic security, but also future prosperity, reinforcing at the same time prospects for stability. The Central Asian states have a crucial interest in being included in the « One Belt and One Road initiative » launched China in 2013 since they are landlocked countries and would benefit from continental wide transport networks. To take advantage of these plans, Central Asian states need to unify their interests and positions.

In order to solve the region’s water and energy problems, Central Asian states also need better cooperation to sign the conventions on the use of water resources in the Amu Darya and Syr Darya river basins, and pursue cooperation regarding the issue of the Aral sea.

What is ultimately needed in the longer term is a « Central Asian Regional Partnership Treaty », which is including the elements and aspects of security, commerce, energy, environment, scientific research and cultural exchanges to consolidate the new regional cooperation process. In the short term, there is dire need for a permanent forum for discussing these vital issues of Central Asia and would be representing a prerequisite step to the progress and development of the region.

To ensure these plans are realised and successful, the Uzbek government and its regional partners need the support of international organizations. They will have to convince them to move from the current competition between great powers behind the different international organizations into a cooperative agenda based on a balance of the different sets of local interests. To achieve future stability and reduce geopolitical rivalries at Eurasian and global scale in a multipolar world,  it is necessary to manage and contain the centrifugal forces in the world with a security architecture fully adapted to this new emerging multipolar world. A new doctrine of multilateral cooperation has to be initiated.

The geopolitical stakes for Europe and Eurasia as a whole

The success of Central Asian cooperation is equally important for the geopolitical interests of Europe. A quick look at the map (Alliances and Major Zones of Instability in a Multicentric World ) illustrating the alliances in the World and the major conflicts and potential instability zones reveals and underlines the striking realities of today’s world.

First of all, the two major stability zones amid a world drifting towards instability, conflicts and growing uncertainty are the Euro-Atlantic space covered by NATO and the Eurasian area covered by the Shanghai Cooperation organization (SCO). On the margins of these two groupings, conflicts and security threats can endanger these « Islands of peace ». The danger of terrorism is already more and more present in these two zones and it is therefore a crucial objective to contain these fast growing internal security threats coming from the crisis zones.

The Shanghai Cooperation organization (SCO) is covering the major part of the Eurasian landmass, and therefore, the future of the organization is crucial to world stability.

Uzbekistan occupies a very pivotal geographical position in the middle of Central Asia and Eurasia. Central Asia, and Uzbekistan in particular plays a crucial role in maintaining stability on the Eurasian landmass for different reasons: Uzbekistan possesses the largest population in Central Asia. Uzbekistan is also a geopolitical lock to prevent instability from Afghanistan and Middle East to spread to the whole of Central Asia, and therefore to Russia and China. This is also of decisive importance for Europe: if there is no peace and stability on the Eastern part of Eurasia, there is no chance to have peace and stability on the Western part because of the growing interdependences in energy, commerce, migrations flows, terrorism and criminal activity (including drug trafficking). The success of the Uzbek national model as a stability provider is equally important.

There are missing links in the security architecture of the European, Eurasian and Central Asian spaces that needs to be fixed in order to avoid a further fragmentation of the European continent between Euro-Atlantic and Euro-Asian alliances.

Synergy is needed between the various actors to achieve geopolitical stability on the Eurasian continent. On a longer term basis, a new Eurasian geopolitical architecture based on a new doctrine of overlapping circles of international organizations would be a major factor for developing and improving Eurasian security (diagram: Overlapping Circles of World stability and Peace). The diagram illustrates the need for a new European security treaty with a Eurasian reach, and a new « Central Asian Partnership and cooperation treaty » situated in the context of an emerging global multipolarity.

We also have to assume that an enlargement of Euro-Atlantic institutions (NATO-EU-OSCE) to the whole of the Eurasian continent is impossible. Firstly, the individual EU and NATO member states disagree on further enlargement. Secondly, it would be impossible for these Euro-Atlantic institutions to manage the geopolitical diversity of the Eurasian continent. This new security architecture is based on the « geographical tightening » principle in the context of NATO’s and EU’s overstretched capacities. Geographical proximity would be a central criterion to build regional alliances in order to foster stability and prevent any further Eurasian fragmentation.

This netting of institutions resembles the « Olympic circles ». The described configuration would be adapted to the emerging multipolar world to maintain a balance between the different states, alliances and political and security institutions. This architecture is aimed at promoting synergies between interleaved organisations like NATO, EU, OSCE, SCO, CIS, OTSC, EEU, OIC and should lead to greater levels of stability. In-between spaces between these structures would be subject to common stabilization policies or « non-aggression agreements ».

This new doctrine of « overlapping circles » supposes the acceptance by international actors of the emergence of a variety of international organizations whose objectives are contributing to Eurasian and world stability. The strengthening of the SCO should, for example, not be perceived in the West as a geopolitical rival, but a future partner to manage multipolarity. It is in the long-term interests of Euro-Atlantic structures, EU, OSCE and NATO, to be complemented by other international organizations like Shanghai Cooperation Organization (SCO), EEU, OTSC, CIS, OIC in order to stabilize the Eurasian continent.

The role of Uzbekistan and its Central Asian partners is therefore very important for the making of possible new and successful emerging security architecture. The Uzbek presidency of SCO has insisted in the recent past on further enhancing the status of the SCO as an influential international structure and expanding its cooperation with key international organizations. This is fully in-line with the Uzbek foreign policy doctrine. The Uzbek foreign policy based on a multivectorial doctrine is concerned with maintaining balance in all directions. Uzbekistan is willing to prove it is contributing to stability and to the reduction of rivalry between the great powers. Uzbekistan is a member of SCO, is a partner of the NATO Partnership for Peace, a major actor of the EU Central Asia strategy, a member of OSCE, CIS and OIC. Uzbekistan therefore has a strong interest, like its Central Asian partners, in promoting cooperation and synergies between these organizations.

The Central Asian states are at a very early stage of this new cooperative and collaborative process, which represents a significant break from their recent past history of competition and conflict. This is the very reason they need support from their partners, since the stakes go far beyond the borders of Central Asia.

It is time for the European nations to take advantage of the potentialities of the multipolar world. Western Europe and Central Asia therefore, have a common interest in deepening their links through bilateral and multilateral relations. Innovative thinking regarding a new geopolitical architecture at Eurasian and global level is a condition for enlarging their respective margin of manoeuvre and achieve a better balance of interests through Euro-Asiatic cooperation.

In a multipolar world where tensions rise in many parts of the globe, success stories are important and should be strongly supported and encouraged by European countries.