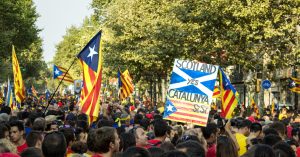 Various threats and risks affecting the European Union are  a danger in the short and long term to the pursuit of European integration and would put into question its very existence under the most extreme scenario:

-the migratory crisis, mass immigration and ideological multiculturalism which deconstructs the cohesion of nations and strengthens an East-West division between the member states

– the conflicts in its geographical proximity that reinforce the divergent tropisms of its member states in terms of geopolitical priorities,

-the multiple interference of external actors

Another risk of potential fragmentation also emerges with the risk of internal dissolution of some EU Member States. Indeed, on 1 October, the Parliament of Catalonia organized a referendum on the independence of this province of Spain. Uncertainty still prevails as regards the immediate outcome of this initiative, but the possibility of an additional European crisis will surely persist over time.

If the independence of Catalonia is declared after a "yes" to this referendum or another attempt since the Spanish government seems determined to prevent such a scenario, a domino effect is likely to occur in other States worked by national and regional separatist movements. The consequences would not be immediate, but a positive referendum would politically reinforce separatist political movements in other Member States, notably Scotland, Flanders, Corsica, Padania, the Basque Country, and would probably inspire the Hungarian minorities in Romania and the Russian minorities in the Baltic countries. The European Union would inherit a new crisis that would add up to all the others and complicate the current situation. A fundamental reform of the European Union is necessary to safeguard the European project, but if certain Member States break up, the task will be impossible because the project will be viable only with strong nations and powerful Member States.

Madrid's efforts to stem this process seem to stimulate the separatist movement in Catalonia. Unlike the Spanish government, European Commission President Jean-Claude Juncker said before the referendum[1] he would respect the choice of the Catalans in the case of a "yes" to independence. He also stressed that Catalonia could then proceed with a procedure of accession to the EU. In the context of the Brexit, there is a strong temptation for EU integrationists to favor the fragmentation of nation-states in order to strengthen the power of the European institutions and launch a federal leak forward. If Catalonia declared its independence, it would undoubtedly reinforce the possibility of an independence of Scotland. In the case of Scotland's independence, the European Union could seek to get the new EU to join the EU and thus punish the UK for the Brexit. The EU could thus claim to continue its expansion while it is currently in a geopolitical regression phase.

Yet it seems impossible today that the Spanish government, opposed to separatism, does approve such a scenario. The potential crisis that could emerge could not be resolved otherwise than through political negotiations, but would most probably lead to an impasse as a result of the divergence of interpretation between the European institutions and Spain and the Member States between them. 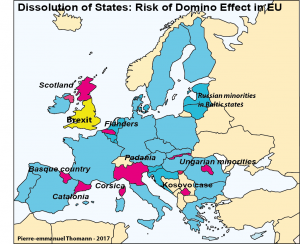